ALLENTOWN, Pa. – She was set on fire and left for dead but now an Allentown dog is happy and healthy. There’s the saying “you can’t keep a good dog down” and Charmane, an adult pit bull, is the perfect example of that.

“These are scars from the burns she sustained,” Bethany Mihalik of the Allentown Animal Clinic said. Mihalik said Charmane was wrapped in a blanket soaked with chemicals, then set on fire, and left for dead. It’s the worst case of animal abuse she’s ever seen.

“She sustained terrible injuries but never lost that sweetness about her personality,” Mihalik said. “She was giving us kisses that first night.” 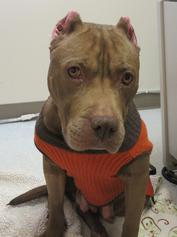 Found in early February in the Sacred Heart Hospital Parking Garage, Mihalik thinks Charmane was a breeding dog that outlived her usefulness.

Charmane was taken to the Lehigh County Humane Society which has spent thousands of dollars to save her. “The smell of accelerant used to cause those burns. The smell of the flesh burning. It’s more than just seeing it. It’s smelling and feeling it,” Lehigh County Shelter Manager Teisha Ellison said. Sadly the Humane Society, which takes in 5,000 dogs per year said cases like Charmane aren’t unique. “We have seen worse than Charmane but she’s up there,” Ellison said.

But Ellison said social media is helping to save the abused, neglected and abandoned. Companies like Hendricks Boards have raised hundreds of thousands of dollars for abused animals, posting the worst of the worst on their website and Facebook pages. “In the years past there was a small group fighting for them. Now it’s everywhere you go,” Ellsion said. Now Charmane just needs to find her forever home.

“I think her face pretty much says everything,” Mihalik, said with Charmane smiling away.

WATCH THE VIDEO AT WFMZ.COM