Percy’s not a big fan of having his teeth checked. But on a recent visit to the For Cats Only Veterinary Clinic in Quakertown, the burly, tuxedo-colored cat was a cooperative patient. “Teeth are looking pretty good,” said Dr. Renee Ziegler, peering inside the kitty’s mouth. Percy’s owner, Peter Jodik of Salisbury Township, also had his other cat, Lainie, in that day to see Ziegler for a checkup. Jodik doesn’t mind the long drive to the vet’s office with two cats howling and meowing in their carriers. “I made a commitment to keep them healthy,” he said. “And I honor that commitment.” 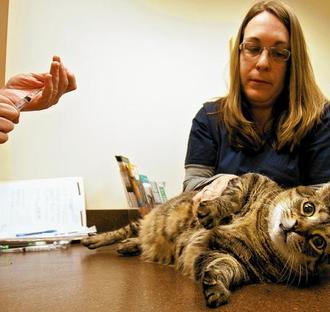 While Jodik sees the importance of regular care for his feline friends, an increasing number of cat owners don’t. Local veterinarians are finding that fewer cats are coming in for routine care. Bethany Bankovich, a manager at Allentown Animal Clinic in South Whitehall Township, said the practice has seen a decline over the years in the number of feline patients that come in for regular, yearly check-ups.
“Cats are the No. 1 household pet in the U.S. However, only 25-30 percent of patients we see on a monthly basis are felines, whereas about 65-70 percent of patients are canines,” Bankovich said.
It’s a trend that’s taking place nationally, too. The American Veterinary Medical Association conducts a comprehensive study — the U.S. Pet Ownership and Demographics Sourcebook — every five years of pet owners across the country.
According to the 2012 sourcebook, between 2006 and 2011 the percentage of households that made no trips at all to the veterinarian increased by 8 percent for dog owners, and a whopping 24 percent for cat owners. Fifty-five percent of cat owners made at least one visit to the veterinarian in 2011, down 13.5 percent from 2006, the study shows.
So why aren’t cats coming in for routine care?
The answer to that question is a complex one, said Dr. Jane Brunt, executive director of the CATalyst Council, a nonprofit group dedicated to cat welfare. One cause may be the perception that cats don’t need the same routine care that dogs do. Among the theories: Cats are independent. They are aloof. They care for themselves.
“There’s this ‘cats can take care of themselves idea,’ ” Brunt said. “The popular media would like people to believe that. Just because they groom themselves, that doesn’t mean they don’t benefit from a brush.”
Dr. Michelle Paul of the Allentown Cat Clinic said some people believe that their cats can’t get sick if they are kept strictly indoors. Not true. Certain upper respiratory viruses, parasites and bacteria can live outside for weeks and can be brought inside on the bottoms of our shoes.
“Cats lay all over the floor and then groom themselves and can then get sick,” Paul said.
The economy also may have a role in keeping cats from vet clinics. Paul said her practice has seen a decline in the number of cats coming in as a result of the recession. She said owners are not spending as much on services such as diagnostic testing.
“With the recession and money going to rent/mortgage, food etc. many people do not have the money to bring their pets in,” Paul said.
Cats also can be difficult to transport to a vet’s office, something Brunt calls the “carrier-barrier.” Cats are usually transported to the vet’s office in a carrier, and most hate it. Brunt says this is because cats are prey animals. Being in a carrier, cats have no control over their environment and that creates fear, which can manifest as aggression. Brunt uses the analogy of getting a horse into a trailer.
“Transportation is difficult,” Brunt said.
That feeds the idea that cats don’t need or want to go to a vet, she said. So when cats finally make it to the vet, many are more seriously sick. And sometimes it’s too late to treat them.
Ziegler says she sees illnesses that have progressed to a more serious stage, even an end stage, when simple preventive care would have helped.
“You’ve lost your window to help that cat,” Ziegler said, “and it’s become a more expensive problem.”
Center Valley cat owner Laura Kleinschmidt took her cat, Phantom, to Allentown Animal Clinic a few years ago for a routine visit. Phantom was losing some weight but overall seemed to be in good health. At the visit, the vet’s office conducted blood work that’s part of a routine visit. Kleinschmidt soon learned Phantom had stomach cancer. But because they caught it early enough, they were able to treat Phantom and the cat lived for two more years.
At the Allentown Cat Clinic, Paul says she’s seen an increase in the number of cats coming in with an upper respiratory virus called calici virus, which causes ulcers in the mouth. It can kill weak and older cats. Paul has seen about 10 adult cats within a 2-month period with this virus. Normally this is an illness found in kittens.
“We are seeing this in cats that have not been to the vet for vaccines for at least five years,” Paul said. “This is a very preventable disease if the cats get a distemper/upper respiratory vaccine every three years.”